Ah, the good ‘ol days. Remember when all you’d look forward to was playing with your Gameboy? If you’re a retro gamer, then I have some good news for you. You can now relive your childhood with this Gameboy Retro Mini Game Console. You read that right, from the name itself, it comes in a more compact and convenient form which allows you to take it everywhere with you whenever you want! So is this RetroMi really worth it? Find out more in my review down below.

Do you miss the 2D pixelated games? Can't find your original console? Give a try to RetroMi, the revolutionary retro console packed with 168 classic games!

While there may be new versions of our beloved Super Mario in this time, it just doesn’t give you the same feeling compared to when you had an actual handheld Gameboy. But the thing about Gameboys is that they’re usually pretty bulky, and they take up a lot of space. Plus, you have to bring around different cartridges whenever you want to play a different game.

This is why the new RetroMi is so perfect for you. It is basically a retro game console with built in games and it comes in a more compact form. Perfect for both kids and adults to carry around freely without having to worry about leaving behind one of their favorite games.

Presentation of the Retro Handheld Console

Just picture your old Game Boy, but smaller. Just like a Nintendo retro console, it has all the same buttons and controls which work the same way. It’s just that, it’s definitely quite smaller.

Is this a bad thing? Not for me, it isn’t. I mean, I actually prefer the smaller device since I can just whip it out anytime I want. And don’t worry, you still get all the classic games like Super Mario, Donkey Kong, and etc. on this retro handheld console.

The arrows are on the usual side, and the same goes for the A and B buttons. The only downside to this handheld retro game console is the screen size. Since the device is smaller, the screen is bound to be smaller as well. This definitely makes sense so I’m not complaining, but I’m sure everyone agrees with me when I say I like playing games on a bigger screen. But, eventually, I got used to it and it doesn’t even bother me anymore.

The power switch and volume buttons can be found on the right side of the Gameboy Retro. And at the back, you can also find the L and R buttons right where they’re supposed to be. On the leftside however, is something you didn’t see in the old device. There is a TF card slot that supports a memory card of up to 32 GB. That’s pretty massive for a Gameboy if you ask me. 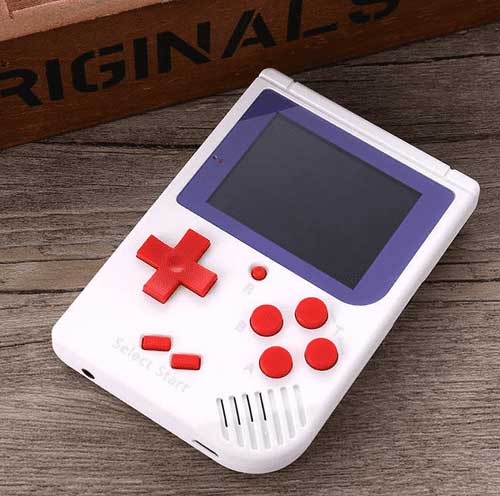 Another new addition is the 3.5 mm jack and the micro-USB slot for charging. These two are found at the bottom. 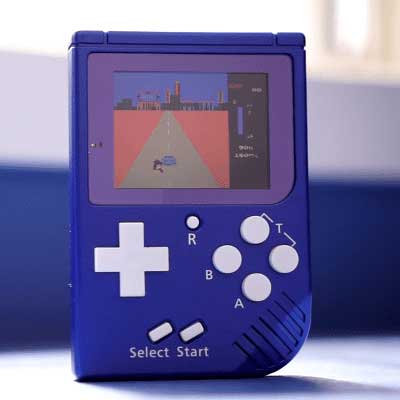 In this part of the RetroMi review, I’ll be talking about a few of the features you can get.

1. A Ton of Games Available

Like I kept saying earlier, this version of the handheld retro game console is quite different because it allows you to play a ton of games at will. You don’t have to switch out the cartridges anymore just to play a different game.

In fact, when you buy the Gameboy Retro Mini Game Console, it actually comes with 168 games for free! It has a lot of classic games including Super Mario Brothers, Pokemon, Pac-Man, Megaman, Sonic, Tetris, and so much more!

If you really can’t handle such a tiny screen, then I’ve got good news for you. The retro handheld console can actually be connected to your TV! I think this was a pretty good idea because now, you’re really getting the most out of your purchase. 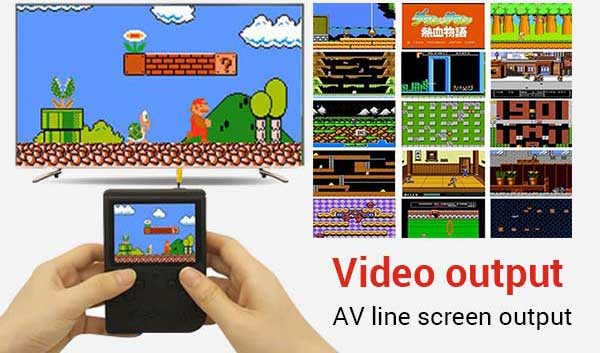 Think about it, you can use it at home when you’re just chilling on a day-off, or you can take it with you as you ride the subway on the way to work. I’m really happy they decided to do this because it’s definitely a feature I would use a lot.

Don’t let its small size fool you. This tiny handheld retro game console can actually last a pretty long time without charging. It’s all thanks to its 600 mAH battery which allows it to operate for over 6 hours! Okay, it’s definitely not that long, but for a simple Gameboy, that’s a lot. 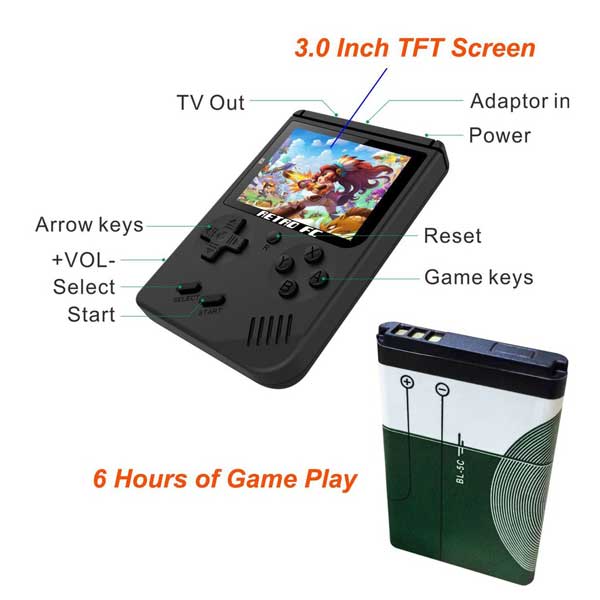 Charging it takes around one and a half hours which is pretty standard so no complaints here.

Did you really think playing games was all you could do with this retro handheld console? Well, think again.

On this tiny device, you can actually play music, view pictures, watch videos, and even read e-books. Plus, there is also a file manager. It definitely has a lot of other great features which is good to have in case of emergencies when your phone runs out of battery for example.

In this section of the Gameboy Retro Mini Game Console review, I’ll be talking about a lot of the frequently asked questions the users of this device may have.

Can you get more games?

Yes, you definitely can! If the 168 free NES games weren’t enough for you, you can always download more. However, the games are a bit hard to find since you need to get them in the old .gba format. Then, you can store it into the micro SD card and insert it in the retro handheld console.

Just a word of warning, it’s also hard to LEGALLY download most of the .gba games. Most of them violate a bunch of copyright and distribution laws but that’s totally all up to you.

How many games can I fit in?

It already comes with 168 games when you first buy it. A lot of these games are the most sought-out ones so, I’m pretty sure you’ll be able to find what you’re looking for.

However, if you still want to add more, feel free to do so. You can download as many games as you want as long as it all fits in the 32 GB capacity.

Can I connect the Gameboy Retro Mini Game console to my TV?

Yes, you definitely can! You can connect it to any TV using the video-out cable. The corresponding port for this cable can be found at the bottom of the handheld retro game console.

This is great for those who want a bigger screen to play with while still being able to experience the classic Gameboy experience.

How long does the battery last?

For a Gameboy, and for a device this size, it actually has pretty impressive battery life. It lasts for up to 6 hours without charging. This is more than enough for a gaming device like this.

The charging time isn’t that bad either. It’s fully charged if you give it around one and a half hours.

When I first played with it, I was actually quite impressed. It felt so alike to the original retro handheld console which gave me nostalgia. Although the screen is definitely much smaller, you get used to it pretty quickly and soon enough, you won’t even mind it. If you want, you can even hook it up to your TV so that you get a bigger screen while still using the device’s keypad.

It’s pretty clear and not hard to see the objects in the game, so that’s great. The battery life is more than substantial for me since I don’t want to be stuck playing video games for 24 hours. Just make sure you give it time to charge after using so that you can continue uninterrupted the next time.

The biggest thing they did that had a huge impact on me was the free 168 NES classic games that came with it. I mean, imagine if it came in blank and you had to download it all yourself. Tracking down all your favorite game is gonna be hard enough. Imagine having to download it too…

Overall, I would definitely recommend getting this device. It’s perfect if you want to start playing your Gameboy again but need it in a more travel-friendly version. 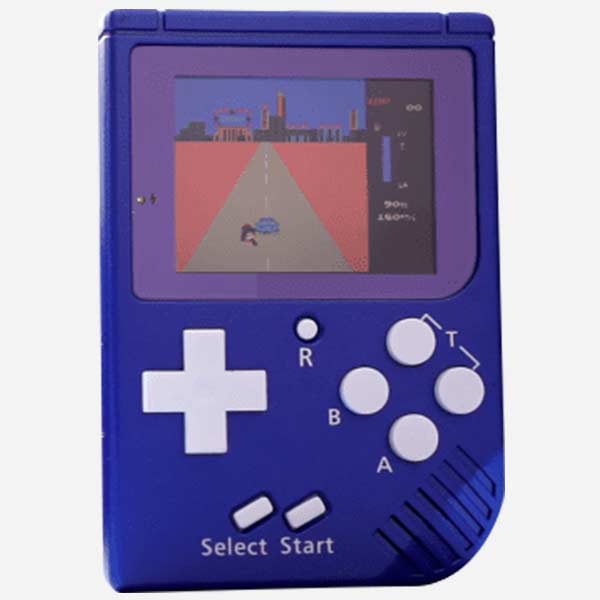