Most families actually invest quite a lot in mosquito prevention. Ever since you were a kid, your mom probably constantly reminded you to apply repellent from that little lotion tube. Or, instead of having to use lotion all the time, you probably sprayed the entire house with insecticide. But oftentimes, these methods are huge trouble to go through. So, here I present to you, a sure-fire way of getting rid of those pests. Stay tuned for my recommendations on all the best mosquito trap available on the market!

Get rid of all these annoying mosquitos with the most efficient UV mosquito trap of the market.

Check the best mosquito traps out in our video

With the recent rise of mosquito populations, it is important to take the right measures in order to keep ourselves safe. There have been multiple outbreaks of the Zika Virus, Dengue fever, and Malaria. Now if you didn’t already know, these are actually real diseases that are carried by a lot of mosquitos.

Once they get to you, the disease could be transferred to you. The scary thing is, the one, tiny, almost unnoticeable mosquito can give you a life-threatening disease. So, because of this, we took to methods that we thought were the best mosquito killer. This included spreading on repellent all over our bodies, wearing those “mosquito repellent bracelets”, and even just bug sprayed the entire house.

Traditionally, these were our only forms of mosquito eliminators. But the thing is, these methods are really outdated and actually, quite useless. While repellents may do the trick sometimes, it is no match for the breeding season. Where even the strongest repellent won’t have any effect on them.

And don’t even get me started on chemical sprays. They’re called chemical for a reason. These sprays actually do more harm than good. I mean, if it can kill mosquitos, who knows what it’s doing to your health when you breathe it in?

So, the best way to actually get rid of mosquitos without having any negative effect on your health is through an electric mosquito killer.

In this benchmark, I focused on 3 products to determine what is the best mosquito trap.

Here we are! These are my top-ranked mosquito catcher.

This is a personal favorite of mine since it checks off all the things I stated in the features of what makes a good mosquito catcher earlier.

The UV light is also an amazing 360 light that radiates from all sides to make sure it doesn’t leave any area unchecked. But unlike the Moskinator which uses a powerful fan to suck in the insects, this device only relies on the UV light.

The mosquitos need to get close enough for it to do its job and zap it out of there. You’d think that it wouldn’t be as effective since it only uses a light. But I was pretty impressed by how powerful it actually is. And, it is also really silent so you won’t even notice that it is there in the corner doing its job.

It is also very portable since it is using a USB power cord. This means you can connect Mosquitron to an adapter and plug it into the wall, or you can even take it around and power it up with your power bank.

That’s right, you can take this everywhere with you even when you’re simply at home, camping in the woods, or having a picnic in the park.

Would I really be recommending it as the top of the best mosquito trap if it wasn’t effective? It is definitely worth the money since you only need this one electric mosquito killer to last you YEARS. On top of that, it even comes with a lifetime warranty. So, you know you’re definitely getting your money’s worth here. See it in action in our Mosquitron review. 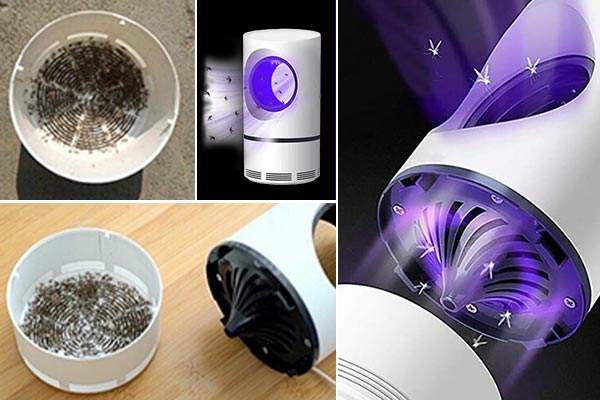 This device is actually quite similar to the first one I mentioned. It has a similarly sleek design that is perfect for blending in with your living room aesthetic or to bring around.

The impressive thing about this is that it doesn’t just use simple capture methods like poisons or sticky paper. It actually has a powerful fan that acts as a vacuum. First, its blue UV light attracts the mosquitos which function as the mosquito magnet. Then, once it gets close enough, the fan sucks it in and zaps it dead.

To me, this is much more effective since some regular electric mosquito killers only rely on the UV light to attract the insects into the device before it can zap them. So sometimes, mosquitos are even able to escape from this. But with the fan, it guarantees that there is no room for error.

On top of that, it is so easy to clean. You can simply unscrew the bottom part of the device and tip it over the garbage bin to clean it up. More details in our Moskinator Sonic review.

It also has the same power source as the top one best mosquito killer which is through a USB cable. This makes it very ideal to bring around with you whenever you go on family outings or have outdoor gatherings.

Moskinator Sonic is a bit on the pricey side but only because it is very effective. It was proven to be the most effective when compared to the usual citronella candles, fly spray, and repellents.

However, it does offer huge discounts if you buy more than one. The starting price of one device comes at around $73. But if you buy 2 at the same time, you’ll get a 68% discount or 3 with a 72% discount. 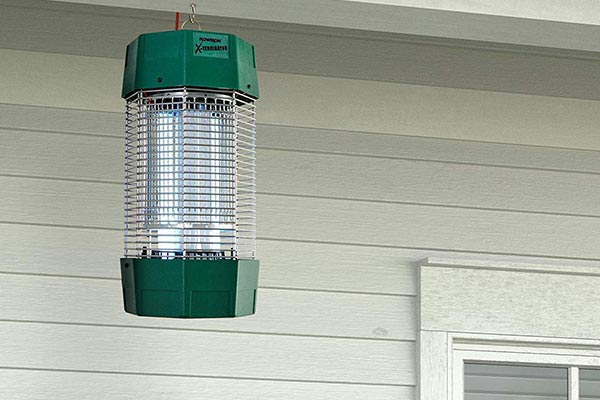 I know, I know, the name is quite a mouthful. But this mosquito catcher can do some pretty amazing things. It is one of the most renowned devices to take care of your mosquito problems professionally.

It actually has four times the luring power of traditional bulbs you can find in the other mosquito catchers. However, it doesn’t use a fan to seal the deal. But, don’t worry, it is definitely effective in getting the job done. It has a powerful killing grid of 5600 peal voltage that effectively kills mosquitos on impact.

The power source is a traditional plug that you have to stick in the wall. And the bulky design makes it not so great in terms of portability. However, this is one of the reasons why it is really safe and considered as one of the best mosquito traps. Because of its waterproof design, the risk of it short-circuiting when it’s raining is really low. It’s also not as prone to flare-ups and over-heating.

Before we dive in, here are some factors that you should take into consideration when picking out a mosquito catcher:

A lot of electric mosquito killer have UV lights attached to them. These lights are proven to attract the mosquitos which make it easier to gather them in one place. The one that most mosquito lights use is called the phototaxis wavelength. I won’t go into details, but basically, this is the wavelength that is the most effective on insects like mosquitos, moths, and etc.

Mosquitos are naturally attracted to body heat. So, the best fly killer should also have a small portion that radiates heat to further draw in the insects.

The mosquito capture method is actually quite important. Some flying insect killers only use plain light and zap them. But other new models now have a type of vacuum within the device. This sucks the mosquitos in to prevent them from escaping then it zaps them.

But take note that not all natural mosquito killers function by zapping. There is also a mosquito catcher that has a liquid trap that drowns the mosquitos. Some even use something like fly traps to stick them down. These may sound pretty okay to you, but I’d still recommend an electric solution for the best mosquito trap outdoor and indoor.

There are some mosquito catchers that works only with propane tanks, and the more common ones are those you see plugged in the wall sockets. But the ones I’ve introduced allow you to bring them everywhere because they can be powered with anything that has a USB port.

Of course, we had to look into the effectiveness of the best electric mosquito killer. In one of the reviews, we were even able to see how effective it was compared to other traditional methods like citronella candles, body lotions, and etc.

The price comes hand in hand with its effectiveness. If it actually gets the job done, then I’d say it’s definitely worth whatever expense it comes in. But of course, if you really want to make the decision for yourself, I’ll be laying it all out for you to choose.

Aside from the annoying itch you get from bites, mosquitos are actually deadly to your health. The worst thing is, you can’t even see them coming. You only notice once they bite you, and that is much too late.

You can always take to the usual traditional methods like candles, bug spray, and repellents, but most of the time these don’t work. Sometimes, it can even make the problem worse by immunizing the insects. On top of that, having to reapply repellent is such a hassle and a waste of time and money. But even when you take to spraying your entire house with bug spray, it could have a lot to do with your physical health. You are breathing in chemicals after all.

So, don’t take that risk and just invest in a reliable electric mosquito killer.

This is definitely much more effective and convenient for you. You can choose to keep it at home or take it with you everywhere. It’ll definitely do the trick even when you’re on vacation, or if you’re just relaxing in the outdoors.

Simply pick out Mosquitron or any of the best mosquito killers that I listed above and you should be good to go! I hope you got something from this review. And remember to always put your safety first. Don’t wait until it’s too late to take preventive measures.